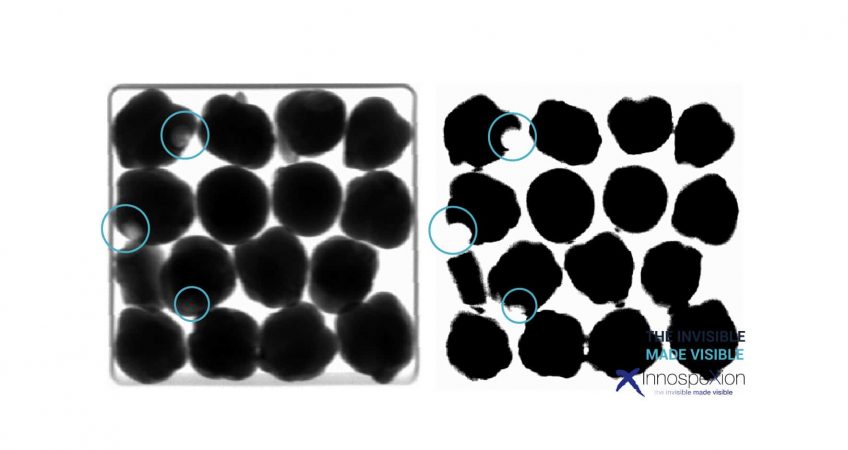 How can one determine the presence of inspects in chickpeas with the help of X-ray technology? While small insect are difficult to see due to low attenuation, their presence is clearly visible and indicated by holes created inside the chickpeas.

Food safety refers to many things. X-ray technology makes things interesting when you experience unpleasant surprises, such as glass splinters, bone fragments, sharp metallic inclusions, and other foreign bodies that compromise food safety. Such foreign objects can be detected, and contamination can be avoided using X-ray inspection.

Food safety may also relate to foreign matter or living organisms which are not supposed to be part of the package. This example relates to a concrete experience of an InnospeXion employee who was cooking dinner one night. When preparing chickpeas, he noticed small black objects among the peas. They were initially considered to be impurities. However, upon cooking, it became clear that they were small flies, and the peas had tiny holes in them. We decided to inspect the peas using our long waves X-ray system. The X-ray image below clearly shows the small cavities where the flies have lived.

Fig. 2. As a result of an initial inspection, multiple insects have been extracted from the interior of the chickpeas.

As the figure shows, some of the peas had large holes in them and were easy to detect by vision, but others did had superficial holes, and the flies inside where therefore very difficult to detect with the eyes.

Fig. 3. Chickpeas with larvae holes (marked with red circles) in which small black flies have developed and become expelled as the chickpeas are cooked (photo at right). The X-ray inspection has been accomplished at 20 kV at a speed of 20 m/min.

This story serves as an example of the importance of X-ray inspection and of how easily product defects can be detected. It also shows how important thorough product inspection is.

Interested in finding out more about food contamination detection with our technology?